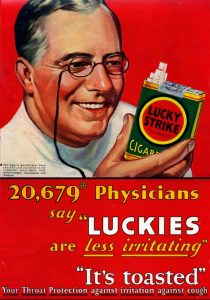 Criminally Effective: What advertising can learn from Somali pirates and Yakuza gangsters

The world moves on, and the advertising industry moves with it.

This is all for the good, and for much of it we have regulation to thank. More regulation, and better regulation.

In recent years, however, the onward march of advertising regulation has intensified, both from governments and from industry bodies. In the UK, cigarette advertising was banned in 2002. Over the same period, alcohol advertising has become ever more tightly controlled. At the same time, the remit of regulation has moved on from ‘Legal, Decent, Honest and Truthful’ to encompass controls on gender stereotyping and guidelines on body image. The first ad to fall foul of these new rules, in 2019, was one for cream cheese which was banned for making a joke about new dads being hopeless at childcare. Or, as the ASA put it, the humour “…relied on the stereotype that men were unable to care for children as well as women and implied that the fathers had failed to look after the children properly because of their gender.”

This coming year we’re about to see the rollout of the British Government’s new HFSS (High Fat, Sugar and Salt) regulations, escalating advertising control to a whole new level. As a result, the promotion of many everyday foods and drinks will be curtailed like never before. It’s bringing us to the point where some are beginning to question how much further regulation could go, or should go, before it begins to encroach on legitimate freedom of expression and consumer choice. Already, the move has sparked furious debate online and in industry bodies, while the IPA has produced an official response saying that the kinds of restrictions proposed would be both ineffective and disproportionate.

So it’s worth looking at things from the other side, for a moment, to see what happens in unregulated industries where there are no controls whatsoever. Of which there are precious few nowadays – or at least, not in the field of legitimate business. There are, however, a number of illegitimate industries. Organised crime, for example, and piracy on the high seas.

There are no rules in piracy. If you have a fast boat and an AK-47, you can do whatever you damn well please. Pirates – of whom the Somalis are the world leaders – capture boats and hold the crews for ransom. But it’s in what happens after the pirates get the ransom money that things become very interesting. Imagine the scene: a man from the insurance company arrives. He’s carrying a holdall full of used twenty-dollar bills. You’re rich beyond your wildest dreams. So what do you do next? On the one hand, you could keep your word and release the crew – who know who you are and where you live, and who can testify against you in court. Or you just can kill them all, along with the man from the insurance company.

If there were a Pirating Standards Authority, there would be clear rules and guidelines on this. But there is no PSA. So what actually happens? As a recent episode of the BBC Radio 4 show Bottom Line reported, in real life, over 90% of pirate hostages are released unharmed. This rises to 94% amongst crews covered by piracy insurance. Of those not surviving, the vast majority either die of natural causes during protracted negotiations, or die in failed escape attempts. Because if you kill the hostages this time, there probably won’t be a pay-out next time. Instead of the insurance man with his holdall, your next visitors are likely to be from the SAS. Even if you’re now rich enough never to have to capture another ship, other members of what you might call the ‘pirating community’ are going to be less than pleased with you if you spoil things for them. They have guns. So without any actual regulation being passed, some of the most lawless people on the planet end up adhering to a voluntary code of professional ethics, at some personal cost to themselves. They do this in order to protect the integrity of the Somali pirate brand.

Acting in the long-term interests of your customers is another area where we see this kind of effect. Japan’s Yakuza gangsters are sometimes able to get advance warnings of police raids on their premises. In February 2012, the Asia Pacific Journal reported on one case, on the island of Hokkaido, where the boss of the Hakodate Yakuza gang received such a warning. Less sophisticated gangsters might have taken pleasure in outwitting and humiliating the police. But thwarted police bear grudges and make bad enemies. Bribery is an option, but it’s also a prosecutable offence. Instead, the Hakodate gang left behind a little present, in the form of an illegal gun, so that the policeman leading the raid wouldn’t lose face or feel humiliated in the eyes of his superiors. It worked. So much so, in fact, that he came back again. And again and again. He ended up holding the police record for most firearms ever confiscated in a single year. So grateful was he for this that on what turned out to be his last raid he politely failed to notice the gang’s 2-ton shipment of cannabis and crystal meth that also happened to be in the building at the time. The moral of the story is that even hardened gangsters act in the long-term interests of what you might term as their customers, if those customers have the power to punish them if dissatisfied.

This, I think, is what it all turns on: the power to punish and who holds it. Regulation is the traditional source of that power. In many ways, it is still a necessary one. But where society and customers have the power to punish brands directly, the example of organised crime shows that effective controls will happen without regulation, or even despite it. In today’s digital world, the power to punish is increasingly accessible to ordinary consumers.

Which means that the debate about the role and limits of regulation is only just beginning.