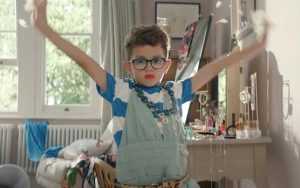 As John Lewis pulls its controversial home insurance ad, research shows that people in the creative industries increasingly think more like each other and less like
the consumers we serve. This means that miscommunication is a growing risk.

I was reminded of this recently when I heard the news that John Lewis had been forced to pull its recent home insurance ad after the Financial Conduct Authority (FCA) found it to be potentially misleading.

The plot goes something like this: a little boy, dressed in his mother’s clothes, roams a large house causing carnage, while his mother sits motionless in a chair, apparently watching but strangely unresponsive to what’s going on around her. I think of is as Norman Bates: The Early Years. On one level it’s been extraordinarily successful: since it ran, huge numbers of people who didn’t know you could insure your home with John Lewis are now in no doubt whatsoever. Unfortunately, many of those people now probably think they’d be covered against wanton destruction. Then there were the hundreds of complaints to the ASA, and all the people so incensed by the advertising that – if you listen to what they say on social media – they’d be minded to cancel their policy, if they actually had one. It’s fair to say that the media coverage hasn’t been universally popular either. For example: “a perfect depiction of everything wrong with our precious Little Emperors in Britain 2021…starring a kid who has never heard the word no.”[1]

Whatever the intention of the people who made this ad, many people are clearly taking out something else altogether.

There’s a long history of mismatch between intention and reception in advertising. In 1959, HO Will’s Strand cigarette brand was scuppered by the You’re Never Alone With a Strand campaign. The ads featured moody shots of solitary men lounging in empty city streets at night. They were intended to make people think of Frank Sinatra. They actually made people think of loners, losers and winos.

In 2017, Pepsi’s Live for Now ad upset pretty much everyone on all sides of the spectrum by suggesting that the complex and bitter divisions of modern life could all be healed by Kendall Jenner giving a policeman a can of fizzy drink. They soon got put straight on that one.

Back in 1946, literary critics WK Wimsatt and Monroe Beardsley introduced a concept they called the Intentional Fallacy[2]. This, they said, is the mistake people make when they judge a work according to what they believe to be the intent of the person who created it, rather than by what the work itself actually is. It’s a concept that’s fallen out of fashion in literary circles nowadays, but it has big implications for advertisers.

Which brings me to HSBC, who have quietly dropped their Make Geography History tagline, aka We Are Not an Island.

The thinking was laudible. The agency wanted to point to the value of interconnectedness. And, in this case, the value being a customer of a big, globally-connected bank. It’s a powerful idea. John Donne made much the same point, minus the banking bit, some 400 years ago: “No man is an island entire of itself; every man is a piece of the continent, a part of the main….” The problem, for HSBC, was in the timing. Launched in 2019 while Britain was still in the throes of Brexit, it was taken by many to be a political comment endorsing the choices of the Remain-voting half of HSBC’s 15 million UK customers and criticising the others. All 7.5 million of them. Which few would consider to be a smart business move. HSBC’s spokesman tried to set the record straight. He said, “This campaign is not about Brexit. It focuses on the importance of being open and connected to the world.”

Trouble was, no-one believed him.

But you’d have thought that at some point before the work ran, someone in the agency or the bank might have raised the possibility that people were going to misread it.

This is where we get to a worrying trend within the creative industries. In our business we like to talk about the importance of diversity. Yet a growing body of research shows that when it comes to our attitudes we are increasingly homogenous, and increasingly distant from the world our audiences inhabit.

A statistical analysis published in the Sociological Review[3] in 2019 found that workers in the creative and cultural sectors overwhelmingly share a distinct cluster of broadly liberal-leaning group values which are often very different to those of the wider public. And in 2020, Reach Solutions’s study of over 3,000 respondents[4] found that ‘advertisers and marketers diverge from the mainstream on every major psychological, behavioural and attitudinal framework that we have explored – cognitive biases and thinking styles, basic human values, empathy, moral foundations, aspirational capacity and motivation’. It’s not just in what we think and feel, either. It’s also in where we come from. The Reach study found that a staggering 70% of their advertising and marketing sample had grown up in the social, cultural, and economic cocoon of grade AB households, compared to just 29% of the modern mainstream.

People who work in agencies just aren’t like other people. We meet very few people in our professional lives with the kinds of perspectives that are common among consumers. We find ourselves surprised when things we consider to be uncontroversial and self-evidently true end up playing very badly indeed in the wider world beyond adland.

There are two answers to this. One would be for the creative industries to embrace a much greater diversity of opinion and social class when it comes to recruitment. I’m not holding my breath on that one.

The other answer would be to put a lot more effort into better understanding, and more accurately measuring, the state of opinion among the people we serve.

If we do that, then we can look for better ways to start from where our audiences are right now, rather than where we are, or where we expect them to be. In the real world this won’t completely eliminate catastrophic miscommunication once and for all. But it will make the kinds of costly mistakes we’ve seen in recent years a whole lot less likely.