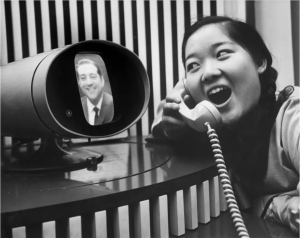 In 1965, Keum Ja Kim a vocal soloist in New York used the Picturephone to audition for Robert Merrill, a star with the Metropolitan Opera who was in Washington at the time. Photo credit: Bettmann/Corbis

What Covid, and Shakespeare, can tell us about effective behaviour change

In 1968, an amazing new technology was unveiled at the World’s Fair in New York. It promised to revolutionise business effectiveness. Called the Picturephone, it allowed people in a room in one part of the world to sit in front of a screen and to see, and talk to, people in a different room in a completely different part of the world. AT&T, the Picturephone’s inventors, hailed it as the future of business meetings. All those time-consuming and expensive business flights, all that productive time lost in travel, all those marriages and families disrupted by executives who were never at home – all solved at a stroke. Admittedly a single Picturephone device would set you back a quarter of a million dollars. Plus, you could only talk for ten minutes at a time. But those teething issues, it was said, would soon be solved.

And so they were. But things didn’t work quite out as predicted. Instead, for the next fifty years, even as videoconferencing technology got ever better and the costs fell ever lower, businesses kept on pumping millions, as well as millions of hours of employee time, into business travel. And then Covid came along, and everything changed.

The question is, why?

For two years, pandemic restrictions stopped international travel dead. But now, as the world opens up again, what we’re not seeing is any kind of rush to return to the old ways of frequent-flyer platinum cards.

To which you might say, the answer is obvious. Businesses have realised that they can save huge amounts of money by replacing travel with videoconferencing. But that presupposes they didn’t already know that. It presupposes that for the past fifty years, all the accountants and all the CFOs in all the world’s multibillion-dollar corporations just hadn’t noticed that they were throwing away huge sums of money unnecessarily, when there was a cheaper alternative readily available.

It is a fact of human psychology that people, and organisations, don’t like to be wrong. More than this, they don’t like making changes that force them to admit they’re wrong. It’s painful and it’s embarrassing. So if you find yourself stuck in a hole of your own making, it’s much more comforting, and much more natural, to keep on digging and persuade yourself that everything is fine, than it is to stop what you’re doing and try to climb out. This is as true of Fortune 500 companies as it is of people like you and me.

Which is where Covid is really interesting.

Because what happened with Covid is that was an unprecedented event that marked a break in the continuum of time, and that changed everything. There was the world before Covid, and there is the world after it. The reason it makes a difference comes down to human psychology. In 2001, a study found that at key moments of transition like this, people are able to split themselves into two, psychologically speaking . They think of me before all this happened, and me now. And because ‘me before all this happened’ is someone else to ‘me now,’ it doesn’t hurt to move on from what that former self might have said or thought or done. There’s no pain involved.

A further study, in 2014, dug deeper into what has become known as the Fresh Start Effect . At special occasions or temporal landmarks, like a new year, or a big anniversary, or an event like Covid, people give themselves special licence themselves to countenance change and to set goals for better behaviour.

So although any half-competent accountant at any point in the past fifty years could not have failed to recognise the huge savings to be made by replacing business travel with videoconferencing, it was only after a big, disruptive event like Covid that it became psychologically possible to climb out of the financial hole they’d been digging for themselves for half a century.

Shakespeare knew about it: after his coronation, the roistering Prince Hal of Henry IV Part 1 became the serious King of Henry IV Part 2, turning away his old drinking friend Falstaff with the words ‘I know thee not, old man.’

But it doesn’t have to be a big event like a pandemic or a coronation. It just has to be something that marks a break. Even the start of a new week can make a difference: me last week versus me now. So amongst university students, the likelihood of attending the gym increases at the beginning of a new week, month, and term. It also increases after birthdays – a future gift to yourself, if you will.

So we live at a time, right now, when people are actively re-evaluating their lives and choices and ready to make changes. The scale and degree to which they – and we – are ready for this is something we probably won’t see again in our lifetimes. For companies and brands this time represents an astonishing opportunity. But it is also a strictly time-limited one. Act now, and the benefits will be significant and sustained. Hesitate, and the window will close. Decades of detailed evidence through the IPA databank proves that behaviour can be steered and nudged through effective marketing and advertising.

This is the time for change. Our industry is what will drive it.