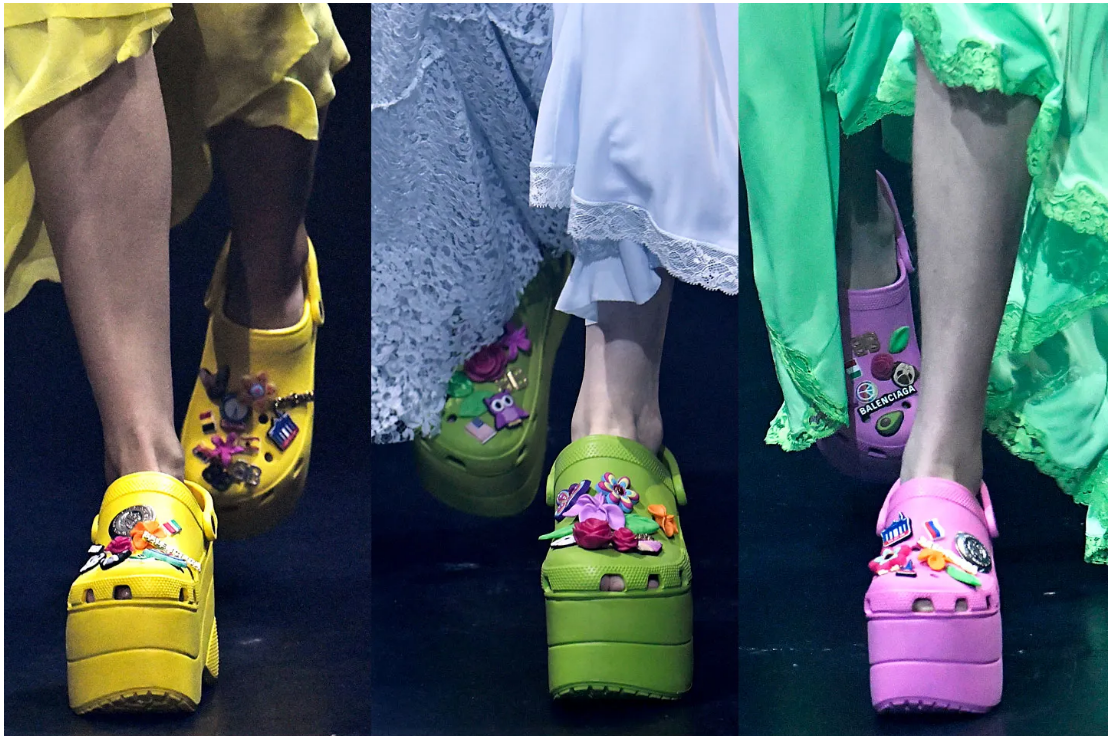 Why this? Why now?

What is the nature of change via limited-edition Crocs, sustainably-sourced pronoun badges and the Overton Window.

We live in fast-moving times. Things are changing rapidly for brands and for marketing, and for a whole lot of other things besides. The question is, how do we navigate our way through, and what are the implications for marketing and for communications?

There’s a story I heard once about the Buddha. He was sitting under a tree, meditating, when a devotee approached him with a question. Master, he said, can you explain to me the nature of existence? For a long time the Buddha sat there, eyes closed, saying nothing. It got to the point where the devotee was wondering whether the old feller had fallen asleep, or worse. He was about to tiptoe quietly away, when, quite suddenly, the Buddha spoke.

It changes, he said.

Shit happens, in other words.

I was reminded of this when I read the news, this past week, that the Crocs footwear brand had just celebrated its twentieth birthday. And worldwide sales of $2.3 billion. And a string of collaborations with Hollywood celebrities and catwalk fashion designers. This is the same Crocs, selling the same plastic clogs, which not too long before were ranked by Time magazine as one of the worst inventions of all time[1] and which also, in a survey by The Cut, was voted one of ugliest products in human history[2]. A brand that, only a few years ago, was so shunned and reviled by all right-thinking people that it stood on the verge of bankruptcy.

It changes, as the Buddha would say.

Or, as supermodel-turned-presenter Heidi Klum puts it on her US TV show Project Runway, That’s fashion. One day you’re in, and the next, you’re out.

But it’s not just in fashion that we’re seeing such rapid and extraordinary changes in the world around us. Even our culture is mutating in ways never seen before.

To take one small but telling example: this past year, a growing number of High Street banks have embraced the idea of personal pronoun badges for staff, so you can tell whether, for example, the person serving you at the till is a he/him, a she/her or a they/them. At NatWest the new pronoun badges are also made of sustainably-harvested, ecologically-friendly bamboo, rather than the usual plastic[3].

I worked for a bank once, before I went into advertising. I try to imagine what kind of response I’d have got if I’d suggested some of those things to my manager. Either the pronouns, or the bamboo, or both.

There’s a time when things find favour, and a time when they don’t. As Shakespeare puts it in Julius Caesar, there is a tide in the affairs of men which, taken at the flood, leads on to fortune. For the makers of Crocs and bamboo pronoun badges, now is clearly the time.

But the question I keep asking myself is, why this, and why now?

There’s a concept developed in the mid-1990s by a political theorist by the name of Joseph P Overton. He was senior vice-president at the Mackinac Center for Public Policy in Michigan. His concept has become known as The Overton Window. What Overton said was that at any one time there is a range things or ideas which are considered acceptable to the general public. If something’s inside that range – inside the Overton Window – then people are happy to think about it, talk about it and have opinions on it, for or against. But once it’s outside the window then it becomes toxic. When it’s toxic, people won’t even give it serious consideration. Five years ago, Crocs were so far outside the Overton Window that, for many, whatever anyone had to say about their merits or virtues was utterly irrelevant – you wouldn’t ever have wanted to be associated with them in any way, shape or form.

Look back through the history of ideas and you get the same thing over and over again. The idea, for example, that the earth rotates around the sun. With the development of telescopes 1600s it became possible able to gather all sorts of evidence and logic for your view. But, as Galileo discovered, even raising an issue that’s considered beyond the pale marks you out as tainted. It makes others feel very uncomfortable around you. So they don’t listen to what you have to say. In his lifetime, Galileo was shunned and ordered to recant. But over time his idea became more and more acceptable. It moved from the preserve of a handful of heretics to a controversial theory, to the modern theory, to the accepted fact. The logic was the same. The facts were the same. What was different was the kinds of people associated with it. Social proof, as we call it nowadays. That’s what made it OK to think about it. That’s what shifted the Overton Window.

In many things social proof precedes rational thought. Once you are able to feel that something is in scope for people like you to think about, then you can start giving it serious consideration. Without this, no amount of facts, evidence or rational argument will detoxify it. People won’t listen.

That’s what Crocs have done spectacularly well. They haven’t significantly changed their products. They haven’t explained the merits of them. Instead they’ve focussed on getting them seen on the right feet in the right sorts of places. So people think, those plastic clogs may be ugly, but look who’s wearing them now!

Effective marketing recognises this. We often think of marketing as the art of persuasion, and so it is. There will always be a time when persuasion is possible. But there will also be times when people will need the reassurance of social proof, before they are open to what you have to say. The art lies in knowing which to do, and when

It changes, as the Buddha would say, it changes.